WARNING: Drinking distilled spirits, beer, coolers, wine and other alcoholic beverages may increase cancer risk, and, during pregnancy, can cause birth defects.  For more information go to www.P65Warnings.ca.gov/alcohol. 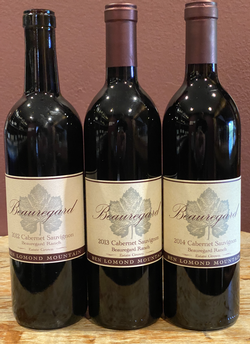 In Stock
Be the first to review this item »
Tweet
1 Bottle Each // only 12 packs available
2012, 2013, 2014 Cabernet Sauvignon Beauregard Ranch Vertical
Vintage Notes:
2012, 2013, and 2014 was the tail end of the drought years that were dominated by dry and hot weather. These are some of the boldest expressions of Cabernet Sauvignon we have ever produced. The fruit is well integrate with emerging savory notes, and the wine shows a personality similar to top Bordeaux with a touch more flesh and texture on the palate.
Vineyard Notes:
The Beauregard Ranch vineyard site was part of an original 160 acre vineyard and apple orchard planted in the early 1900’s. The vineyard was abandoned during prohibition and then resurrected in 1949 when retired Sherrif’s deputy Amos Beauregard purchased the property. It sits at an elevation of 1700 to 1850 feet on a southwest facing slope. Monterey Bay marine influences combine with sandy loam soil to produce wines with minerality and striking acidity. Plantings: Four acres Pinot Noir, clones: Pommard, 667 & 115. One acre Chardonnay, clone 4. Three acres Zinfandel, clone Primitivo. Four acres Cabernet Sauvignon, Dijon clone.